Skip to content
With Wofford On Deck, Watch The Hypocrisy Kick Into Overdrive
Football

With Wofford On Deck, Watch The Hypocrisy Kick Into Overdrive

With Wofford coming to town, get ready for even more of the SOS narrative (Photo by Richard Shiro/AP)

For whatever reason, the strength of schedule narrative seems to be a point of contention throughout the national media every time this Clemson Football team is being discussed. Obviously that’s not something that just started this season, but it does seem to be getting pushed harder in 2019 that it has been recently.

No, the ACC isn’t very good this season. It’s possible that it’s as bad as it’s ever been, particularly in the Coastal, but is it really that much different than most years? We could debate for hours on end the reasoning behind the subject getting so much play, but for the purposes of this discussion, the why doesn’t matter.

When the weekend arrives and Clemson does what it’s supposed to do by blowing out its annual FCS opponent, all the focus will be on who they played. The subject will be heavily scrutinized and framed almost in a way that somehow Clemson intentionally sets it up this way. That they’re getting away with having to do less than other teams.

Fact is, when it comes to out of conference scheduling, Clemson is one of the most aggressive P5 schools in the country. Who else is scheduling true home and home series with SEC teams? Plus, they’re scheduling them knowing they already have an SEC opponent on the slate each season. No other teams are playing two out of conference games against the SEC.

Yes, they still have one game every season against a G5 team, then another one against one of the in state FCS schools. So what? Every other conference in the country is doing the same thing outside of the B1G. They aren’t allowed to schedule FCS opponents anymore but now most are just playing another G5 school, and the difference between the two usually isn’t much.

When it comes right down to it, Clemson is being far more aggressive when it comes to the non conference schedule than any other team currently in the top four. That’s something you won’t hear the talking heads point out. It doesn’t fit the narrative.

The SEC has gotten a pass for to long now. Not only for how many games they’re playing each season vs non P5 teams, but for when some of those games are played. For years, the majority of SEC teams have been scheduling their FCS opponents the week before rivalry week. Rarely has anyone in the media called them out on it. This is what the SEC schedule looks like for Week 12 this season.

It is the same old story every season. Most of the SEC teams place the biggest cupcake of the season the week before they play their biggest rival. The only reason there aren’t more teams on this list is every team got two bye weeks this season and three SEC teams have their second bye that week, when that usually wouldn’t be the case. Florida and UofSC both have routinely scheduled FCS games in Week 12.

The hypocrisy is strong. Even more so than normal this season. Clemson is getting killed because of what conference they play in, and that is something they have no control over. It’s not their fault they play in a league with so many basketball first schools.

At least one media member out there is still calling it as he sees it. 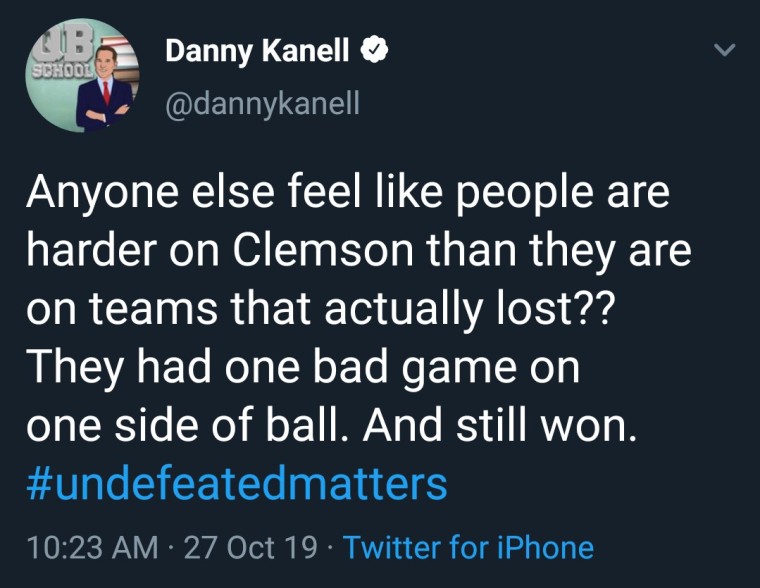 The SEC schools routinely play far more of the “cupcake” games that Clemson does. Then schedules them in such a way that they’re basically getting an extra bye week before playing their biggest rival. That is something they have total control over, and yet they’re still getting a pass.

The fact of the matter is that SEC Football brings in big bucks for ESPN. It’s in their best interest to push a narrative that places SEC Football in the most positive light. That’s business. However, it’s also highly hypocritical. If you’re a Clemson fan, it’s also par for the course.